Skall runs the fabulous YouTube channel Skallagrim, focussing mainly on historical arms and armour as well as knives / tools, firearms, bows, and crossbows. He himself is careful not to call himself an expert, just an enthusiast, but he puts a great deal of thought, research and experimentation into his videos. He’s equally careful within the films to differentiate between opinion, conjecture, commonly held belief and solid fact, so you always know where you are with him. Other people clearly feel as positively about him as I do, because his YouTube channel has 1,200,000 subscribers…

I find him incredibly valuable for research when I want to know how a particular weapon actually worked in reality.

His own interests also encompass TV, film, fantasy and gaming, so if you want to be able to separate fact from fiction, this may well be the site for you.

If you’re interested in collecting modern day swords you’ll find him even more valuable, because he makes a lot of videos evaluating the various products available to people just like you.

You can find him in the following locations.

The following is a very small sample of videos from the Skallagrim YouTube channel, posted here with his permission. If you have the slightest interest in historical weaponry, I strongly recommend you give Skall’s channel a look.

An introduction to the buckler - AKA the puny mini-shield

Skall compares a normal full sized shield with the much smaller buckler. (If you’ve never heard of the buckler before, it’s where the word swashbuckler comes from…)

TV and film tends to get fixated on metal armour because, well, because it’s shiny, and cool, and, well, it’s metal! And if they don’t focus on metal armour, they’ll focus on that incredibly sexy leather stuff. In reality though, many people actually wore gambesons which were nothing more than padded jackets. They were cheap in comparison to metal or leather, but it was a lot more effective than you’d think. In this video, Skall tries out a variety of weapons against a dummy wearing a “not historically accurate gambeson” to see just what it could do. The results may surprise you…

In fact, a gambeson is lot more than a padded jacket. It’s a number of cloth layers very densely packed, and tightly stitched together. Ruth Goodman gives us a great example of just how tough it was to make these things in her Secrets Of The Castle series, if you want to see it being done.

(Gambesons were also worn underneath metal armour because they cushioned the blows much better than metal or leather alone could ever do.)

Secrets of the Castle TV program

I mentioned the Secrets of the castle TV series in the introduction of the previous Skallagrim video. If you have any interest at all in medieval history, and in castle building in particular, this is the series for you. Ruth Goodman, Peter Finn and Tom Pinfold spend weeks working with the team building Guédelon castle in France, getting very hands on, finding out how things were really done. I include the video on this page because of the gambeson mentioned above.

You can buy the series here:

Or below in the UK shop. 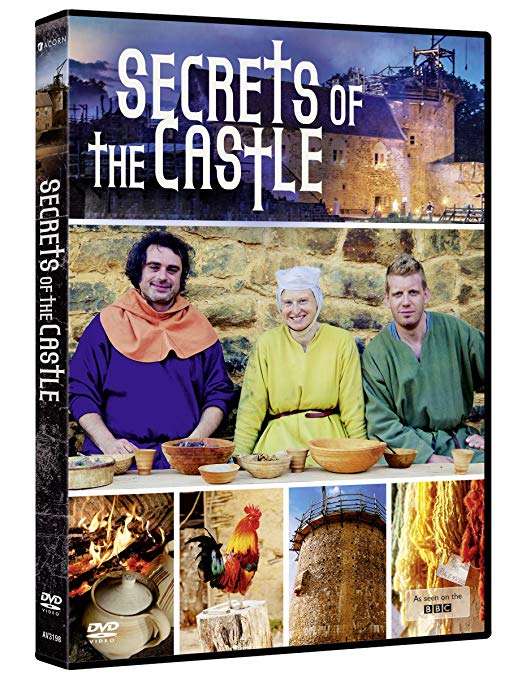